Last Sunday evening I was entranced by the television set…watching True Blood. Monday morning, I was a bit regretful for not watching the Emmy’s, but that regret immediately dissipated as I clicked through photos of supposedly best and worst dressed celebrities on the red carpet. What. A. Yawn Fest. Just bunches and bunches of bland, dreary, ill-fitting dresses. No vibrancy or creativity. Just boring. I was thrilled to learn that Claire Danes won for best actress after appearing in Temple Grandin, and while her performance was absolutely superb, I suspect another reason she may have been selected is the fact that she was one of few women wearing an interesting dress that wouldn’t bore viewers to death. And she has a really cute husband so I don’t doubt that the camera crew took the opportunity to jolt slumbering ladies awake with a riveting shot of Hugh Dancy applauding his talented wife.

So needless to say, Claire Danes gets my pick for best dressed. One hardly misses the fashion target when wearing Armani Privé. 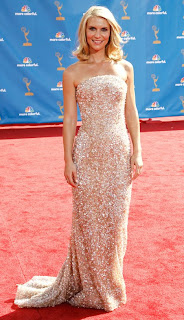 Worst Dressed: Dianna Agron in Carolina Herrera. I never ever ever ever would have predicted in a million years that I would choose this actress wearing this designer as "worst dressed". But...I just don't know what to make of this Carolina Herrera creation. I normally adore Herrera, as she impeccably joins "pretty" with "tailored", but someone was drunk in Herrera's design house one evening because there's just no other excuse. Fortunately Dianna is young and has years to rectify this unfortunate mistake. 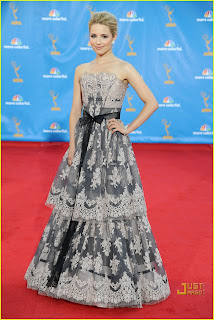 My I.D.K. Moment: January Jones in Versace. I lurve the shape this sculptured dress creates, and the color is striking. It’s the strange disk like material that’s throwing me off. I don’t know. Do I wear it or put it in my hard drive? 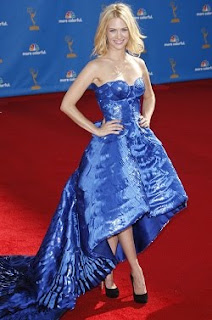 I’m Over Your Crap: Heidi Klum. I’m just over your crap. I normally love Marchesa dresses; they are nostalgic and whimsical. But look what you’ve done, Heidi. Marchesa for street walkers. Victoria Secret model street walker, who has like 22 kids. Would it kill you to find a hemline not directly below your lady parts? We get it. You’re on Project Runway. We’re supposed to believe you have as valid an opinion as Nina Garcia and Michael Kors because you prance down a catwalk in underwear. Alright, already! But we get to see enough of you plastered on inappropriate Victoria Secret ads in every flippin’ mall so can you keep it covered for one evening at a formal event. 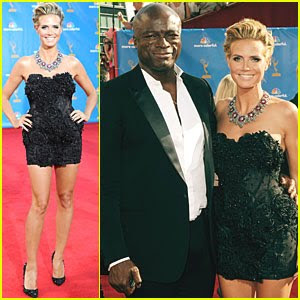 This has been Sarabeth’s Obligatory Red Carpet Opinions.

Don’t forget, the next publication of Maroon Weekly hits stands tomorrow. Pick up a copy and visit us online at www.maroonweekly.com!
Posted by Unknown at Tuesday, August 31, 2010

Email ThisBlogThis!Share to TwitterShare to FacebookShare to Pinterest
Labels: Misadventures in Opinions