It’s Monday. And Sunday was an oddly stressful Sunday so this Monday morning is looking bleak. Yes, I mean for that to sound entirely melodramatic. If Tuesday were at all gracious it would give Wednesday and Thursday a miss and go straight to Friday.

To make my Monday all the more dreadful, I have given myself the sobering task of recanting a rigid stance in which I was previously cemented. Now this is a rare occasion so don’t become accustomed to it. Every now and then, though, I find small loopholes in my fashion opinions. I am prepared to admit defeat when I have been bested.

Now I’m not admitting total defeat in this particular instance. I still think that Toms flats are wretched and unflattering. But I am officially revoking my embargo on Toms wedges. I have decided that they offer vintage appeal. And as I’m trying to assemble more boho chic ensembles, they have made an admirable contribution.

I would suggest purchasing a vibrant color, though, as one could easily verge on appearing dowdy in a more neutral tone. I went with yellow, fortuitously. Originally, I wanted the red striped pair. Alas, they were out of my size so I braved the yellow, and I am so pleased that I did. 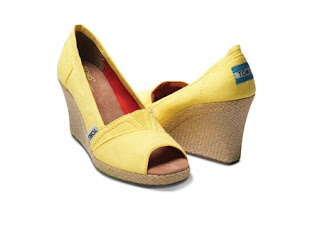 My sentences are uncharacteristically brief this morning. Why does the screen look blurry? Should my head feel about as light as a bowling ball? Is this at all indicative of my sleeping habits?

I think I’m spent for today. I’ll leave you with this thought, though. While I recant my previous opinion on Toms wedges, I shall never recant my opinion about Tom Cruise. He is a shoddy, predictable actor.
Posted by Unknown at Monday, September 06, 2010

Email ThisBlogThis!Share to TwitterShare to FacebookShare to Pinterest
Labels: Misadventures in Opinions, Shoes: My Love and My Addiction