Normally, I would reserve this for next Tuesday, but my impatience has bested me. Last night my friend Jess got to see my new ink for the first time in the flesh....or on the flesh. A tattoo enthusiast herself, she was supportive of my idea from the beginning and ready to see the finished results.

Upon the big reveal, her countenance was one of excited approval and...shock. Upon examining it closely, she claimed that my previous pictures didn't do the tattoo justice. I reviewed them, and she's absolutely right! The protective layer of scabbing that almost immediately forms over new tats looked like it had bathed in pepto-bismol.

It's been two weeks since I first received my new design, and the healing process has definitely unveiled a work of art.

I'm bragging on Derek over at Poking You, of course. The design was my concept but he brought it to life through many intricacies. 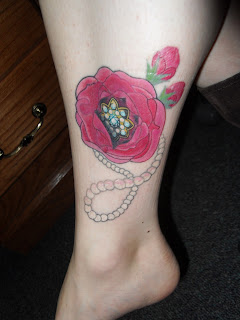 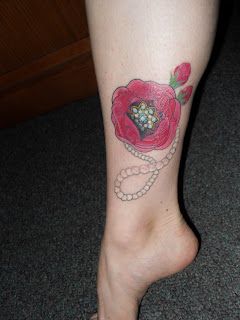 Yay for being able to shave that part of my leg!
Posted by Unknown at Wednesday, October 13, 2010