On Baby Brunch Cupcakes and Noses

Last Friday I had lunch with my girlfriend, Jess, and before we hugged goodbye I was convinced that I needed to re-pierce my nose. Jess has one of those tiny little diamond studs about which I raved last week so after receiving positive confirmation from B and other friends, my mind resolved itself quickly. A hole in my nose there would be before the weekend was out. (My imagery makes you want to run out and get one for yourself, right? Holes in the nose for everyone!)

Jess also assisted greatly in my decision on what kind of cupcakes to make for Cade's dedication brunch after she surprised me with the best little cupcake cookbook. I am horrendous when it comes to decision making, and were it my goal to choose a cookbook, I would spend over an hour in Hastings trying to commit myself whole-heartedly to just one, and I would exit with either 3 or none. Thank you, Jess, for being such a great friend and nipping my indecision in the bud!
I love the book because it offers traditional cupcake recipes but throws in plenty of unconventional ideas as well, and the instructions are so simple. Anyone can master a couture cupcake using this book. I made lemon cornmeal cupcakes topped with mascarpone frosting and a lemon peel garnish. Ridiculously good! We consumed them all before I even thought to take a picture.

But back to holes in the nose. At 3:16pm last Friday, the following text correspondence between Juliana and me occurred:

Me: I wanna get my nose pierced tonight.
Juliana: I'm gonna do it too.
Me: Want to tonight?!
Juliana: Yes!!!

By 11pm B and I had arrived in Denton, and Juliana and I were in her car headed to Ace's Tattoos. I did my research before leaving work that day, and this spot was in close proximity to our house and had the best reviews in Denton. 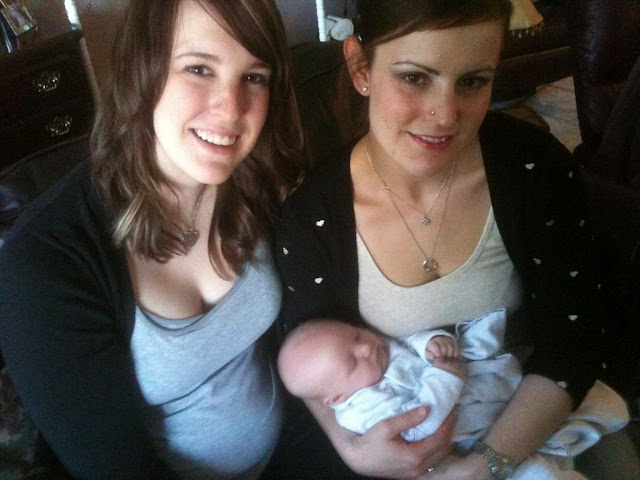 And there you have it. Juliana and I stuck to our guns and allowed each of our right nostrils to be impaled. We had to start of with an 18 gauge diamond stud for now, as anything smaller can inhibit proper healing. In about 6 weeks or so, though, I'll try going down a notch to a 20 gauge (bigger the number, smaller the gauge). I like it, though!

We told Cade that he would have to wait until he's six months before attemtping this look. They grow up so fast nowadays!
Posted by Unknown at Monday, January 31, 2011